An Interesting Reading: Animals' Lawsuit Against Humanity by Ikhwan Al-Safa' 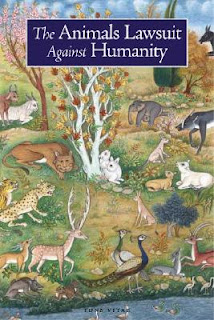 A mysterious group in the Islamic world which existed around the 10th century AD, Ikhwan Al-Safa' (Brethren of Purity) is considered a "heretical" group by mainstream Sunni Muslims. Once the Abbassid Caliph Al-Mustangid ordered that their "rasai'l" (treatises) be burned wherever found. The treatises, however, made their way to our hands and being an "encyclopedia" in the proper sense of the word, they probably constitute one of the earliest encyclopedias Man has ever invented. Ikhwan Al-Safa' remain until today a controversial group in the history of Islamic thought. The identity of the members of the group was never revealed since they were a secret group, which adds to their mysterious character.

The interesting thing about their treatises is how open-minded and progressive their ideas were even by today's standards. Ikhwan Al-Safa' saw the supreme being in all forms: in Allah, in the Christ, and even in Paganism. They considered all these as Muslims. Their view of Islam was that of a wide and tolerant view that encompassed all religions and surpassed all boundaries.
The reading that I want to share here is one of their treatises entitled "The Animals' Lawsuit Against Humanity". In this treatise, Ikhwan Al-Safa' provide a very intriguing and exciting story that forces you to think and to contemplate on the question of the centrality of human beings. Given that the treatise was written in the tenth century, it is truly genuine. The treatise tells the story of animals who complain to the king of Jennies about the bad treatment they receive from human beings who think of themselves as superior to animals and hence entitled to treat animals as slaves. In the complaint, the dialogue is so deep and mind-taking that it makes you question these ideas: Are we, as human beings, central? Are we superior?
This idea of human beings' centrality is central to most religions, at least, the monotheistic ones, and it is, in my opinion, a very narrow-minded view of the world and the universe. Human beings came to existence about a million years ago as Homo Sapiens evolved from their ancestors around that time. The Earth, of course, existed long before, and had all sorts of life and animals long before Man came to being. If we add to this the fact that Earth is just one planet in a universe that contains an extremely large number of galaxies, each containing another huge number of stars, and each with some planets rotating around. If we put all this into perspective, the Solar system appears as a tiny, indeed very tiny, thing, and the Earth, which is one of its humble-sized planets, appears even tinier. So if this is the case, I do not absorb the idea that Human beings think that they are the "only" wise beings in the universe. Even within Earth, I think that Human beings, as expressed by the animals in the treatise, have indeed very few abilities to boast about. Human beings are slow, in fact very slow, compared to other animals. Their senses are weak or at best moderate. Of course, they are smart. That's true. But we are judging this from our own perspective which we cannot get over. In other words, this is an extremely biased view to think of ourselves as superior to animals since in reaching such judgment we are just bounded by this very mental faculty we are boasting about. We cannot see ourselves from outside. We are just inside and we'll forever be inside.
Another interesting point in the treatise is its amazing ideas on evolution. Yes. Evolution! In a tenth century treatise! It talks about the order of animals in the universe, and which animals follow others in rank. Again, evolution, as opposed to creation, shakes human feeling of superiority and perhaps security.
This is definitely a book that is worth reading and deep thinking!

Posted by Mohamed Saleh at 8:00 AM